Origin and distribution: Nguni is a collective name for Swazi and Zulu cattle found in the eastern part of Swaziland, in the eastern part of Zululand in the Republic of South Africa and in the south of the Save River of Mozambique, where they are called Landim. The ancestors of the present day Nguni cattle of South Africa were brought into the country by the southward migration of the Khoi-khoi (Hottentots) people. In Zimbabwe, the Nkone (Manguni) breed has recently been recognised as the only surviving population of what has been called "Matabele" cattle. These cattle are related to Nguni (DAD-IS 2005; Rege and Tawah 1999). Smallholder farmers and commercial farms keep them in southern Zimbabwe. Although they are classified to be of the Nguni descent, they are probably genetically more heterogeneous than, and more distant from, the other members of Nguni group (Rege and Tawah 1999).

Physical characteristics: Nguni breed is a sub-type of the African sanga cattle. Although the colour pattern varies widely, the frequent pattern involves white hair with pigmented skin; black, brown red, dun, yellow are common, either as solid colours or in various combinations (black-and-tan or bridle). Coloured hair is common around the muzzle, the eyes and on the inner surface of the ears; occasionally few spots occur near the tail setting. Their head is broad over the eyes and at the muzzle and straight or slightly convex in profile, with a moderately dished forehead constricted just below the horns; horns are typically lyre shaped which may be twisted in males; polled animals are also common; ears are small and pointed; dewlap, prepuce and umbilical folds are less developed; the cervico-thoracic hump, which is muscular rather than fatty, is well developed in bulls although not noticeable in cows. Unimproved animals are small, with withers height of about 105 cm whereas improved Nguni cattle have height at withers of 135 cm for bulls and 125 cm for cows (Rege and Tawah 1999).

Peculiarity: They are resistant to infection by trypanosomosis, ophtalmia, heartwater, other tick-borne diseases and tick infestations. They are also tolerant to heat and light. The animals exhibit exceptionally good fertility under harsh conditions. Heifers particularly have an early age at sexual maturity, and the calving percentage is normally high (Mason 1960; Collins-Lusweti 2000) with a low calf mortality (Mason 1960; Ramsay et al. 2000). They have also cultural value in that animals of solid black colour play an important role in the ceremonial life of the Swazi and Zulu, including, as wealth and for payment of dowry, their links with other tribes, their food and clothes and their warfare. The Nguni people utilised the huge colour variety to designate animals for specific ceremonial and cultural purposes. For example, the animals with black noses were regarded as royal cattle and were given to the King. These are known as royal Nguni. The breed is also known for its calm temperament and good mothering ability. Nguni cattle are less prone to dystocia, this being ascribed to their slopping rumps, small uterus and low birth weight. They are excellent foragers and will graze and browse on steep slopes and in thick bush. They fatten well on natural grazing as well as in the feedlot (Brownlee 1977).

Breed status: In 1951 the total population of Nguni cattle was estimated at 400 000 head (Mason 1960). Recent estimates (2003) indicate numbers as as high as 1 800 000 and 340 275 (DAD-IS 2005) for South Africa and Swaziland, respectively. No population data is available for the breed in Zimbabwe. There are elaborate programmes of breed characterisation, improvement and in-situ conservation in the form of semen for the Nguni in Swaziland and South Africa and there is a strong breed society. Apart from the area where the Nguni occur naturally, there are some 140 registered breeders owning 1 400 registered cattle.

Utility: The Nguni cattle are used for milk and meat; their socio-cultural functions are also important. The body conformation of the Nguni is more of a dairy than beef type but it is principally used for beef production and for work. Lactation milk yield of 1200 kg, over 298 days period was recorded. Mature bulls weigh from 430 to 680 kg, while cows weigh 225-450 kg and oxen from 590 to 725 kg (Epstein 1971; Kasowanjete 1983; Rege 1999).

The areas where Nguni cattle occur are climatically harsh, prone to droughts and are disease-ridden. Nguni cattle and their crosses have been proved to be suitable for beef production where temperature and humidity are high. They are not large cattle with bulls weighing 500-700 kg and cows 320-440 kg (Dionisio and Syrstad 1990; Ramsay et al. 2000; Colins-Lusweti 2000). Mean calf birth weight of 30.3kg was reported by Collins-Lusweti (2000), respectively, while weaning weights of 146.9 and 135.6 kg, respectively have been reported by Dionisio and Syrstad (1990) and Collins Lusweti (2000) for the breed. Calves grow at 0.70 kg per day until weaning. Finished carcasses dress out at roughly 180-220 kg. Marbling is good with a thin covering of fat. They have long productive lives; cows calve regularly and produce 10 or more calves. The cows show great efficiency and often wean calves that weigh 45-50% of their mature body weight (Dionisio and Syrstad 1990). 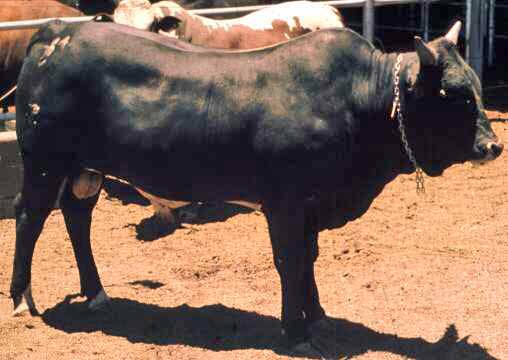 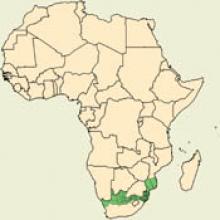 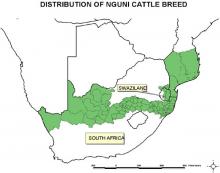